skip to main | skip to sidebar

The Beatles featured pretty heavily in my young life. Both my parents were into music. I was allowed to stay up past my bedtime when Yellow Submarine was shown on the Channel 56 8 o'clock movie.


honestly? psychedelic art gave me agita as a young girl.

I think I was in my twenties before I discovered that the voices in the movie were NOT John, Paul, George, and Ringo.

So is it any wonder then, that I spent the first decade of my life convinced that this singer was Paul McCartey:

And this song was sung by John Lennon:


I think this is the first time I have ever seen Jeff Lynne's eyes!
Posted by jaz at 7:32 PM No comments:

It's my blog and I'll anthropomorphize if I want to...

A moth followed me into the house the other day. I tried catching it, but it was flying pretty high. I figured one of the cats would soon make quick work of it. Ringo seemed like he wanted to take a shot. Ever since he and his mom Pippin took down that mouse a few months ago, he's been raring for another hunt: 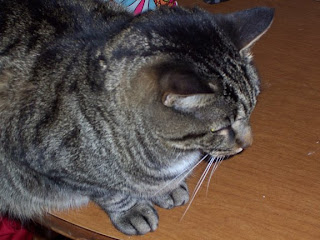 I forgot about the moth until the next morning, when I was startled by the dark blotch on the shower wall. 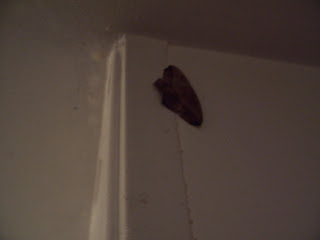 I'm not the type of person who gets freaked out by bugs - and even when I do freak out, I collect myself enough to try to capture them and set them free, rather than smooshing them (except mosquitoes. no mercy for mosquitoes). But showering and moth rescue are not really compatible activities. And honestly, the thing was so quiet and unobtrusive, I'd forget about it by the time my shower was finished. Besides, I don't have quite as much reason to despise moths as some people.

Yesterday was day three of the moth hiding out in the bathroom. It was fluttering around the shower caddy, perhaps trying to glean sustenance from the bottles of shampoo and conditioner. I took pity on it, and knew I had to set it free.

Moths have always struck me as rather forlorn creatures. Always fluttering around lights they mistake for the moon. Plus their clumsy flight patterns remind me of all the flying dreams I've ever had - the epic struggle to achieve liftoff, the herculean effort to stay airborne... Not to mention, unless you're a Luna moth, people don't really care. It's all about the pretty butterflies. *ahem* Not that I'm bitter.

So, time to set this one free. 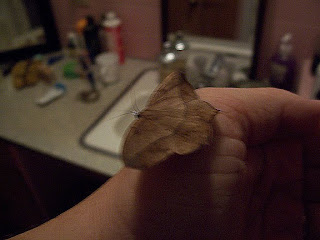 i close my eyes and hold my hands and walk up to a broken heart...

My favorite Miracle Legion song, and I never even knew there was a video.

I taped a copy of Me and Mr. Ray from my friend Delene at UMass (where is Delene and her roommate Leah now?). I listened to it a lot that heartbroken semester. I don't even remember what was on the other side of the tape. I would just rewind to the beginning.

I remember seeing Miracle Legion at the Hatch. My ex came up for the long weekend with his new girlfriend in tow, plus some other friends. I was trying to be all mature and cool about it, but I was pretty miserable. We were tripping madly. I was mesmerized by the music. And Mark's hair.

Mark lost his wife last year. I can't even imagine that heartbreak. Now he's raising their twin daughters alone. Some amazing musicians have put together a tribute CD for Mark. It's called Ciao My Shining Star. Henning, tell the nice people how to get their copy.
Posted by jaz at 7:08 AM No comments:

It's a feeling, a heartbeat...

Dirty Dancing was voted the "Official Class Movie" of my graduating class in 1988. Which pretty much set the stamp on my refusal to see it. I mean, the "Official Class Song" was Whitesnake's "Here I Go Again," and besides being bitter that my suggestion of Talking Heads "Road to Nowhere" was not chosen, I couldn't stand Whitesnake. I figured the film tastes of my fellow classmates were probably the same. Besides, at that point, if you'd asked me, I would have told you my favorite movie was Terry Gilliam's Brazil (actually, if you ask me now, I'll tell you the same thing).

In the summer of '89, I was home from my first year at UMass Amherst, working by day as a chambermaid at a hotel in my hometown of Plymouth, and nursing a seriously broken heart. I went home sick from work one day, ostensibly from heat exhaustion; though I imagine low blood sugar from a lack of appetite coupled with a hangover from crying into my rum and coke the night before contributed to my lowly state. I was crumpled on my mom's couch, watching the end of some movie on HBO, and didn't even have the energy to turn the channel when Dirty Dancing started a few minutes later.

I don't know if it was my weakened state, but I was. sucked. in. I suddenly understood the appeal of Patrick Swayze. The soundtrack included old rock n roll songs I dug, not just the schmaltzy hit. I totally teared up when Baby did the lift. It felt good to step out of my smart girl role and just enjoy some dancing for a change...

RIP Patrick. I'll never be sorry.
Posted by jaz at 6:00 PM No comments:

I did not have a great run this morning. Which sucks, as I'm running a 5K in a couple of weeks. I'm going to blame the wine I drank last night, and a less-than-ideal night's sleep. Oh, and the heat. Sure. Why not? The real culprit is my slackiness now that the YMCA is closed due to the fire. *sigh*

It started out great...cued up on the Mp3 player was one of my favorite steady pace songs:

...followed by another one that makes me feel like running strong...

I was running on the Manhan Trail, which begins just down the street from my house. 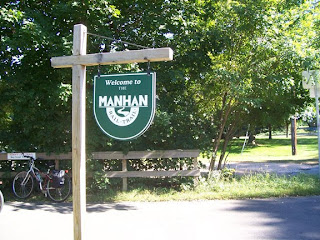 It's the cool and shady end, and I started with a good strong pace. For me. Which is pretty slow by most standards. But I was thinking about the race and how this would be a good pace if I could keep it up. At the 1 mile mark I was feeling good and figured I'd make it a longer run. Maybe 40 minutes, 45.

I ran past Wilton Brook, which is pretty low and stinky due to the dredging of Nashawannuck Pond. Ew.

After being in the sun for a bit, my pace slowed. My legs started feeling a bit heavy. Vampire Weekend helped a little:

I gave it a valiant effort with another favorite pace song:

I tried landing my left foot on the handclaps. It was hard work. I couldn't keep moving at that pace. I had to slow to a walk. Stupid wine. Stupid sun. I hadn't even made it 30 minutes.

I trudged back to the water fountain at the fire/police station. As I approached, another favorite running tune came up, and I knew I had to at least try to run the last leg home. After a few slurps of water, anyway:

There's an unshaded rise - not even a hill - before the last cool, shady leg of the run. I wasn't sure I could even make it to that section. And then this song (which I thought I'd swapped out of the playlist for a rest) came up. Good thing, too.

I wouldn't call it a strong finish, but I finished, trying to dodge the ubiquitous slugs on the path. Because that's what I need - guilt for slug-killing on top of the sluggish self-esteem.

September 1991. It's one of those early autumn mornings ripe with promise. Fierce blue sky, just a hint of coolness in the air. I'm on the Northampton/UMass shuttle, heading for my first class. I like taking the bus. I tell people it gives me a chance to catch up on my reading, but usually I just put on my headphones and sink into the music while I watch the scenery pass by.

On this morning I'm listening to Surfer Rosa. This copy belongs to my boyfriend. It had been eaten by an old tape deck, but he managed to salvage it. Took the shell of the cassette apart and rewound the tape. It sounded fine - the crumpling had happened at the very beginning of a side, with the clear header tape. I'd had the tape in since I left the house to walk to the bus stop, and side two was just finishing. I hear the crinkle of the crumpled header tape, the whir of the auto-reverse kicking in...

We're in Hadley, the intersection of Routes 9 and 47. The Farmer's Museum and the town hall next to it are scalding white against the blue sky. There's the hiss of the tape. I feel the drums kick in, and the bass....and suddenly the bus feels like a roller coaster, and we have climbed to the top of the hill, and I can see for miles. I want to scream with the rush of joy, of adrenaline...

I will never forget how happy I feel to be alive at this moment.

I didn't get to see the Pixies before they broke up. There was a show in Boston that I heard about, but I was a poor student trying to support myself on the meager wages of my record store job. I did get to work a They Might Be Giants show at Smith, and Frank Black was the opener. My friend was doing the catering. He let me help him so I could get in for free.

I met the Johns for the first time. I was surprised and a little sad by their standoffishness (but found out the reason for it years later, which will have to wait for another blog post). Meanwhile, Frank Black was the warmest, sweetest guy - which I didn't expect from someone so screamy. He told us how he'd recently become a bit of a wine connoisseur, and had just come back from France, where he'd consumed lots of amazing wine. He produced a bottle, and proceeded to pour glasses for the hospitality staff. It was superb. I loved him. When the show started I went upstairs and danced my ass off during his set.

September 2005. I'm living in Charlottesville, Virginia, the midday host of a radio station I love. But I miss Nothampton. I miss being able to walk to venues where the bands I love are playing. Most of my favorite shows are a two-hour drive to DC. And then comes word that the Pixies are playing the Charlottesville Pavilion. It's a ten minute drive from my house.

I run into some friends on the way in. We get down just close enough to the edge of the stage. The band takes the stage. I feel the drums kick in, and the bass....and I burst into tears.

I had not forgotten how happy I was to be alive at that moment. I screamed my voice raw, and even with earplugs my hearing was muffled the next day. I figured that was it - I'd finally gotten to see one of the bands that made me so. happy. And that was it. That would be my Pixies experience...

My friends got tickets this morning. jaz
i'm an ex-communard, former record store clerk, current DJ and radio producer. i have recently returned to my home state after a self-imposed exile in the south. i came back with a husband and five cats in tow. i am a really crappy housekeeper.